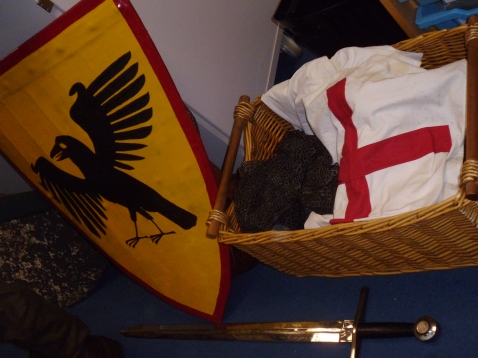 Today we had a complete break from routine as Jed returned to school with the ‘Up and At em’ History team. This is the third time that Jed has come to us and created a History day. In 2014 we had a replica WW1 trench set up in the hall for the day and last year we all re-enacted the siege of Leicester as part of our Civil War day. Today, the focus was on wicked King John and the signing of the Magna Carta.

We had an introductory assembly telling us what the day would involve then the three members of the group all took different year groups to tell and show them what  life was like in the Middle ages. A lot of my Year 6’s were surprised to find out how hard life actually was for most people 800 years ago. Jess’s descriptions of how the local ‘wise woman’ might treat injuries and ailments were quite graphic but the children still all wanted to volunteer to be a patient!

Sir Richard explained what it meant to be a knight and showed us the equipment that might have been worn. Finally, at the end of the day, Jed told us about the signing of the Magna Carta and how the country nearly ended up falling into the hands of the French had it not been for the loyal knight, Sir William Marshall.

The day was quite hectic as we had to move from one activity to the next and it must have been really tiring for Jed, Richard and Jess who worked through the day with only a short break. The sessions were only short as we wanted all of the children to experience everything and as we are a large school, that can be quite difficult. However each session was full of information with lots of props and details to hold the children’s interest.

It was a great day where the children learned a lot in a really enjoyable way and we’ve ticked at least part of the History curriculum box (although that is purely incidental!)  We’re already looking forward to next year’s History day.

Recently retired Ex-Assistant Head of a large primary school in Leicestershire although I seem to be in school teaching quite a bit still. View all posts by Janette